Stained Glass in the Retrochoir and Chapels

20. The Virgin and Child, flanked by angels. The area of the Retrochoir was previously known as the Lady Chapel.

Note:  The benign expressions of the Virgin and Child, the delicate blues and greens of the drapery contrasting with the red glass, and the fine painted borders.

Given by Robert Frank, for many years Rector’s Ward

21. Christ in Glory. The single figure of Christ is a commanding presence, clearly defined by the muted shades of the browns and golds and the quality of the glass painting.

Note. The ‘embroidered’ panels on Christ’s robe feature the temptation by the serpent, Adam and Eve’s disobedience and a crushed serpent round a triumphant cross. 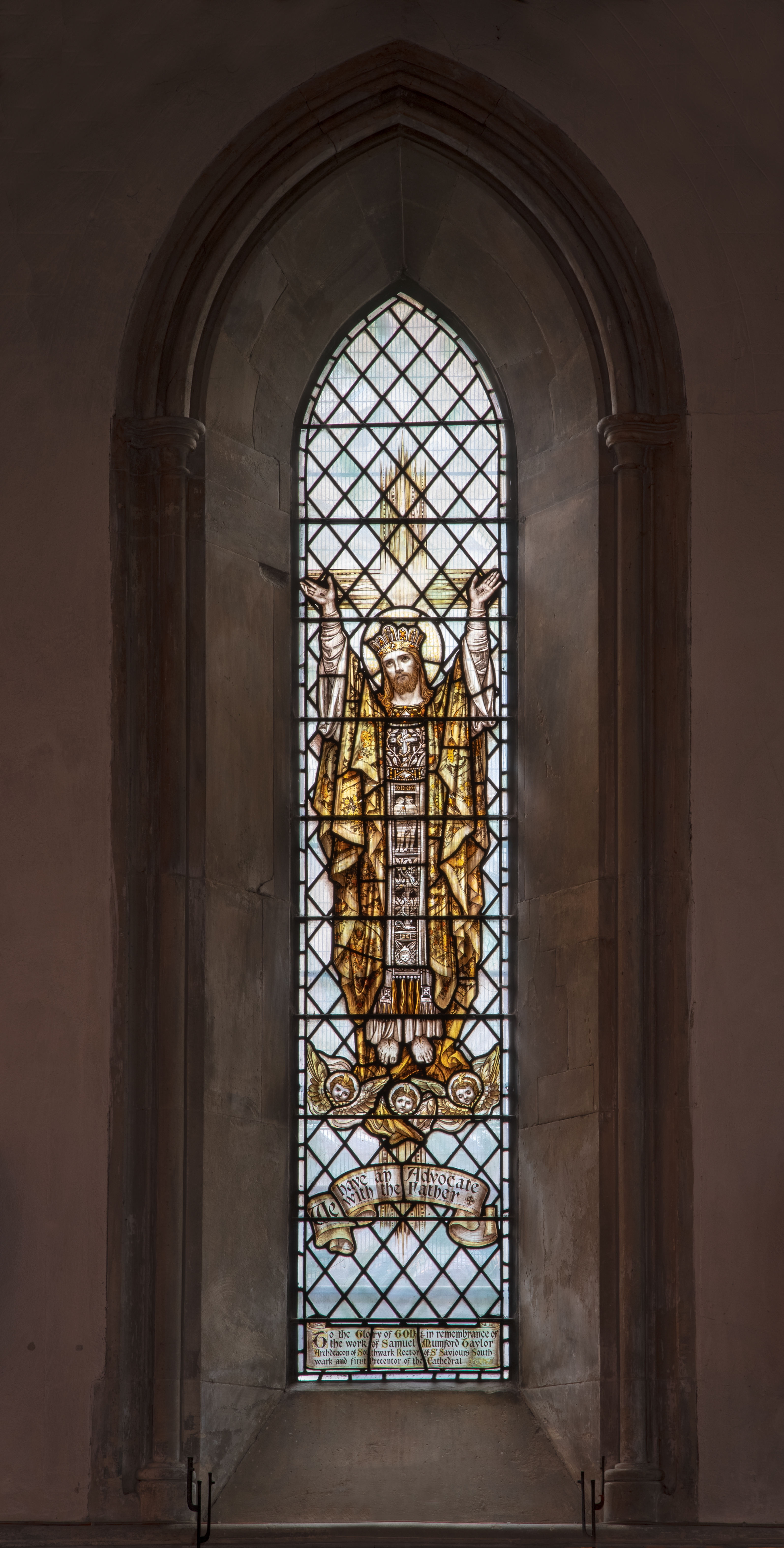 The East wall of the Cathedral has been divided into four separate chapels, each decorated by Ninian Comper. His skill as a designer in timber, fabric and paint can be fully appreciated here.

Note : The carved figures decorating the divisions between each Chapel, and the paintings and hangings which give each separate space its own identity.

22. The Chapel of St Andrew – North Wall: Martyrs Window. In the tracery of this three light window are the coats of arms of (left to right) Scotland, England, See of Canterbury and Archbishop Laud.

Left light: King Charles I holds orb and sceptre, the symbols of Royal authority. His name still stands on the roll of benefactors of St Saviour’s as a helper of its poor, and he was regarded as a defender of the Church of England against Puritan influences. He was beheaded in 1649 by the Parliamentarian forces led by Cromwell. On either side are small figures of St Edward the Confessor and St Ethelbert, the only English kings to be canonised.

Centre light: St Thomas Becket, Archbishop of Canterbury (1162-1170).  He holds his archiepiscopal cross and a sword, the instrument of his martyrdom. He defended the Church against Henry II and was murdered by four of the King’s knights in Canterbury Cathedral. In his name the hospital of St Thomas was founded by the Prior and Canons of this church in the 12th Century, on a site adjoining the church. It moved across the road in 1212; there it remained until 1862. The present St Thomas’s Hospital now stands on the South bank of the River Thames, opposite the Houses of Parliament. On either side of St Thomas are the small figures of St Anselm and St Alphage, both Archbishops of Canterbury.

Right light: William Laud, Archbishop of Canterbury(1635-1645). He holds an archiepiscopal cross, and from his right wrist hangs an axe, the instrument of his martyrdom. He supported Charles I, was impeached by Parliament and was executed in 1645. On either side of him are small figures of St Edmund and St Dunstan, two earlier Archbishops of Canterbury.

Maker : Charles Eamer Kempe, 1897. Kempe’s mark, a wheatsheaf, is shown twice, once above each mullion.

Given by Sarah Stevenson in memory of her husband Captain Curtis William Stevenson, d.1894, and sister Mary West, d.1895, and to commemorate three Englishmen who died for their principles.

The East Windows of the Retrochoir.

The four three-light East windows of the Retrochoir were all designed and made by Hardman of Birmingham in 1921. The windows share the theme of Christ’s birth and early life with his family, suited to the dedication of the original church to the Virgin Mary.

23. The Chapel of St Andrew – East Wall: The Annunciation.

Left: the Virgin Mary and her parents, below is St Modwena with crozier, pen and book.

Centre: The Annunciation, with St Elizabeth and John the Baptist, her son, below.

Right:  the Holy Family rejected by the innkeeper, below is St Hilda holding a crozier and a monstrance..

Commemorates Elizabeth, d.1919, wife of Thomas Francis Rider who is commemorated in window no. 28.

24. The Chapel of St Christopher – East Wall: The Nativity

Left: The Three Wise Men see the star, below is St Faith with palm symbolising martyrdom, and a candle, the light of faith.

Centre: The Nativity, and below, a crowned martyr saint holding a palm leaf and a church; probably St Hilda who founded Whitby Abbey and is usually shown wearing a nun’s habit.

Right: The Shepherds with a musical instrument, a lamb and a crook; below an abbess holds a crown of thorns and a crozier.

War Memorial window, presented by OXO Ltd., commemorating employees who fell in the World Wars, 1914-1918 and 1939 – 1945. The OXO factory stood on the South bank of the Thames just West of Blackfriars Bridge. Only the Art Deco OXO tower remains as a landmark.

25. The Chapel of Our Lady – East Wall: Presentation in the Temple.

Left: Simeon and Elizabeth, and in the medallion below, a crowned abbess holding a crozier.

Centre: Presentation in the Temple; in the medallion below, a crowned abbess with a crozier and book.

Right: The Wise Men travelling, one holding a sceptre in his right hand; in the medallion below, a crowned abbess with a hind, possibly St Catherine of Sweden.

26. The Chapel of St Francis & St Elizabeth of Hungary – East Wall: Adoration of the Wise Men.

Left: The flight into Egypt; below is St Agnes with the palm leaf and lamb, her symbols.

Centre: Adoration of the Wise Men; below is St Cecilia with an organ, her symbol.

Right: Christ in the carpenter’s shop; St Agatha is below, holding a gridiron relating to her death by burning, and a palm of martyrdom; her breast is pierced by a sword.

Given as a thanksgiving for victory in the First World War.

An abstract design containing horizontal bands of warm and cool colours to represent the four seasons or elements crossed by sweeping shapes to suggest the presence of the Holy Spirit.

Maker: Alan Younger 1993. Created entirely by the artist in his Crystal Palace studio.

Note:  The three vertical shafts of light, for the Trinity, which produce twelve Stars surrounding large Sun and Moon shapes, ancient symbols of the Resurrection.

Given by Eric Tucker, Churchwarden, in memory of Florence Tucker and in gratitude to God for his family, for the Cathedral Family, and for the Parish and Cathedral School.

The Rider family of builders were involved in the building and rebuilding of the cathedral over many years. Thomas Ryder was the builder of the current nave in 1895. The three-light window portrays key events in the Cathedral’s history.

Left: The upper scene shows some nuns and a ferryman, a reference to a 9th Century convent on the site which was funded by dues from a ferry across the river. Below, Peter de Roches, Bishop of Winchester (1205-1238) surveys the burning ruins of the Priory in 1212.

Centre: The virgin and the boy Jesus who carries a carpenter’s set square. This refers to the dedication of the Cathedral of St Saviour and St Mary Overie and the theme of building.

Below, two bishops, William Gifford of Winchester and Edward Talbot of Southwark, with the plans of the cathedral.

Right: Bishop Thorold surveys the new nave being built in 1895. Below him, figures of the different building periods of the Cathedral stand in prayer around the Cathedral tower. They are in the habits of: a nun of the 9th Century convent; a medieval bishop representing all the bishops who restored or repaired it; an Elizabethan merchant representing the vestrymen or merchants, known as the ‘Bargainers’, who bought the church from James I to use as their parish church; a Victorian churchman from the time of the 19th Century restoration of the church.

Throughout the window are depicted stone masons, carpenters and other building trade workers; a glazier climbs a ladder carrying a panel of stained glass; there is also a seated figure of Thomas Francis Rider whose firm rebuilt the nave in 1895.

Note:  The lively details of craftspeople at work on the Cathedral building.

Given by the Rider family in memory of Thomas Francis Rider.

The window commemorates The Diamond Jubilee of Queen Elizabeth II in 2012. The design reflects the progress of Her Majesty’s reign as ‘Defender of the Faith’ for sixty years, signified by the sixty sparkling ‘jewels’ of glass scattered throughout the window.

The motto at the base reads ‘Vivat Regina’ (Long Live the Queen) Defender of the Faith Diamond Jubilee 1952-2012.

Maker: Leifur Breidfjord, Reykjavik, Iceland, 2012. His signature and date are bottom right, next to the Glaziers’ Company’s shield of arms.

The commission was won through competition by the renowned Icelandic artist Leifur Breidfjord, who described the work as ‘vibrant and sparkling yet severe in its symmetric forms, a colourful creation to inspire joy and optimism and an individual artwork in harmony with the architectural setting.’ The window was designed and made entirely by Breidfjord in his Reykjavik studio.

Note: The glowing colours. Although the window is much brighter than its neighbours in the Retrochoir, the colours

pick up the muted tones, especially purples, in the adjacent Rider window. The designs are linked via geometric shapes and the dove in the apex of both windows.

A piece of yellow glass in the top left of the window purposely associates this window to one made by the artist for Reykjavik Cathedral.

A gift of the Worshipful Company of Glaziers and Painters of Glass, funded by the Glaziers Foundation 2012.